Double the pleasure, double the fun: two couples prove that happily ever after applies to both work and play

Sharp knives, open flames, high pressure, risky decisions and some pretty serious emotions—these are just some of the elements at play inside a typical professional kitchen. And while some restaurants manage to coast along and stay afloat amid the challenges, some hit a slump and fail, with the shop owners’ relationship crumbling in the process—or worse, causing the failure. But then there are exceptions, like the recently opened Koku and the multi-branch Tex-Mex watering hole Chihuahua Mexican Grill—two homegrown, free-standing restaurants that prove that, perhaps, being a married couple is the ideal business relationship for running a successful restaurant. 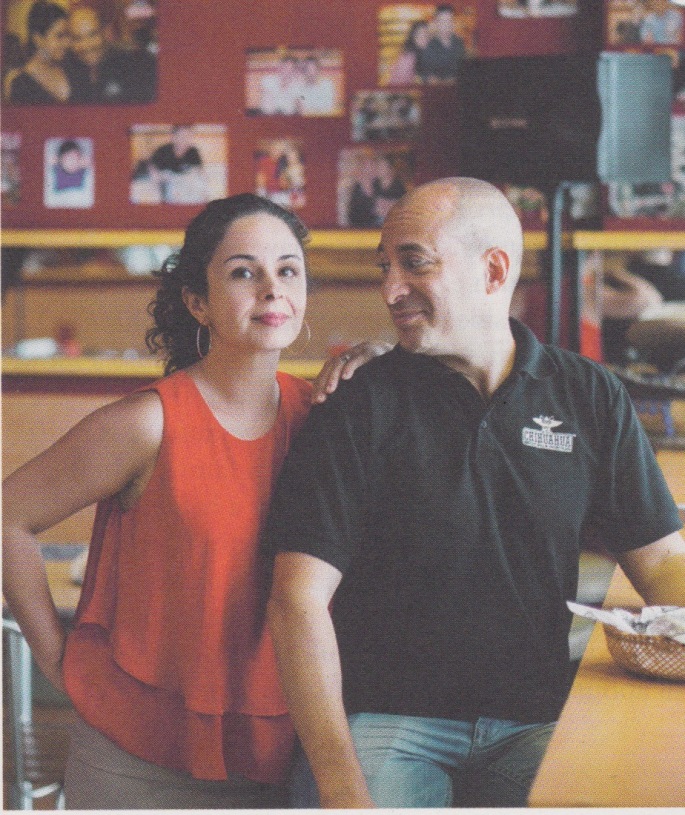 “Oh we fight all the time, no problem,” shares Ines Cabarrus-Habayeb, only half jesting. “But that’s actually healthy,” she says, adding that when she and husband Elian both feel strongly about their opinions on certain issues that involve Chihuahua, a good fight is often in the offing. “Maybe ‘fight’ is a strong word because we don’t come out of it hating each other,” she surmises, “but it’s more of that we really argue it out. At the end of the day, it’s either we figure out a common ground or one would concede to the other and say, ‘Okay, let’s try it your way.’ And if it doesn’t work out, then the other gets the pleasure of saying ‘I told you so’.”

For Bambi and Michelle Meer of Koku, a “community” restaurant serving Japanese comfort food in Makati’s buzzy Salcedo village, physical activities make for good outlets to let out steam arising from work-related issues. “We do everything together—we run and bike together so we really have no choice but to settle issues immediately,” says Bambi. “Normally we step back and approach it when we’re not too immersed in whatever is going on or what has to be settled,” adds Michelle, “and we make sure we don’t go to sleep angry. If it’s a really major decision, it’s not something we decide on right away. We try to find a compromise and work through it, and we do it in prayer.”

Tradeoffs, benefits
Odd work hours, time away from the family, limited travel time, and a lot of hard work may be some of the disadvantages that come with couples working together. “Work just follows us wherever we go—we can’t just take a breather and stop. Unlike in corporate nine-to-five where you can go home from your boss, in this setup you can’t. And we’re both the boss,” says Michelle. But both dynamic duos agree that the benefits greatly outweigh the costs. “I’d say it’s really all typical disadvantages of running any restaurant—with or without your spouse. But they’re not necessarily things you cannot work your way around,” Ines adds.

“Foodservice really involves a lot of time,” says Bambi. “There’s a lot of sacrifice for family. When my six-year-old daughter asks us if we’re going to Koku and we say yes, she knows we won’t be home for dinner. And it’s both parents, so we have to work around that,” he states.

All the same, the couples agree it’s a setup they’d prefer any day over working for somebody else. Elian, a former CPA of a multinational company, hits the nail on the head. “What you’ll gain is freedom—your destiny is in your hands. It’s up to you to make this work. You can fail together but also succeed together, so it’s up to your creativity, your industry or how hard you work, how you tap different sources. If it works, you enjoy your success. And if it doesn’t, this might even bring you closer together because you’re fighting a common cause,” he says.

Keeping it together
Couples like the Habayebs and Meers may make back-of-the-house life and love look easy, but only because they put in the necessary hard work to keep the relationship, both at work and at home, strong.

It’s all about solid foundations and having clearly defined set of roles. At Koku, Michelle leaves all the F&B related tasks to Bambi, whose extensive background in the restaurant business includes running Meat Plus Cafe and Chef Samurai in Subic, as well as Kettle and Tender Bob’s in Manila. “That’s his core. He knows how to build the restaurant from the ground up, so he’s really the front of the house. He trains our staff, he organizes the flow of the kitchen, and some days you’ll find him here dispatching food in the kitchen. Meanwhile because I have a marketing and merchandising background, you’ll see me on the computer figuring out food costs, researching new ideas of dishes and different trends, and how we can apply them here,” shares Michelle.

The Habayebs, whose collaboration not only includes running Chihuahua but writing a best-selling book, organizing the bi-annual Manila’s Best Kept Secret Restaurant Awards, and raising their adorable 10-month-old baby girl, Paloma, says it’s really all about starting things with a shared passion and vision. “You have to be aligned with each other from the start. If deep inside one of you wants something different, then it’s going to cause a lot of problems,” says Ines matter-of-factly.

Deciding to start a restaurant is quite like making that decision to start a family, admits Elian. “It’s like having a baby. If you love your baby, you won’t mind getting up really early in the morning and staying up all night. Like, we don’t feel taking care of Paloma is work at all. And neither do we feel that the restaurant is work.”